TODAY for Seafarers a Big Hit 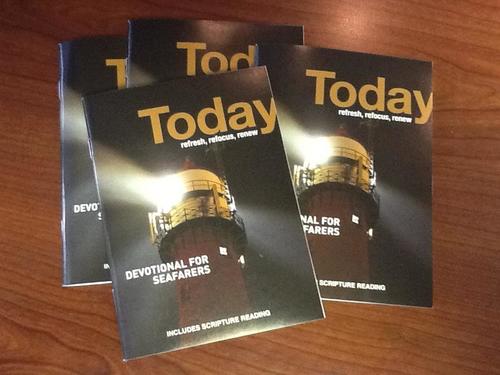 By mid-2012 our active chaplains, Jason Zuidema and David Rozeboom, felt that although the devotional TODAY  was appreciated by the seafarers its content wasn't always very relatable to their particular lives.  There was at the time no other devotional specific to this industry.  This brought Jason to ReFrame Media at the Back to God Hour asking if it would be possible to create a TODAY specifically targeted to seafarers - thankfully they responded with much enthusiasm and support.  Jason, and David and Ernst DeVries from the Vancouver Ministry to Seafarers got to work and created 31 devotions with questions.   With the wonderful help from the staff at BGH/ReFrame Media the devotional went to press and 10 000 copies were made.

Half came here to Montreal while the other half went out west to Vancouver.  They arrived just in time to include in our Christmas Parcel Drive and each seafarer who came in to the port of Montreal during the month of December received one along with a parcel (Read more about that here)

Since then many more have been handed out and been happily recieved.  Jason and Dave also went on to create a facebook page called Today for Seafarers encouraging seafarers to friend the page and follow or join the encouragement and discussion regarding the devotional.

Please rejoice with us at the success of this project - not for own reputation - but for the continuing opportunity to share the gospel through this new resource.  May God recieve all the glory from each devotional that is recieved by the seafarers we serve here at The Ministry to Seafarers.

Thank you to all our supporters for making our continued work here in the Port of Montreal a possibility.