October 7, 2020: Despite being in the pandemic Red Zone, we had a successful and fun Virtual Seaway Bike Tour Fundraiser! Thank you for helping us exceed our fundraising goal of $5000.

Free T-Shirt Draw: Congratulations to Natalie P., her niece and Daniel G. for winning a free t-shirt!
Visit our Facebook and Instagram pages to enjoy the photos submitted by our riders. 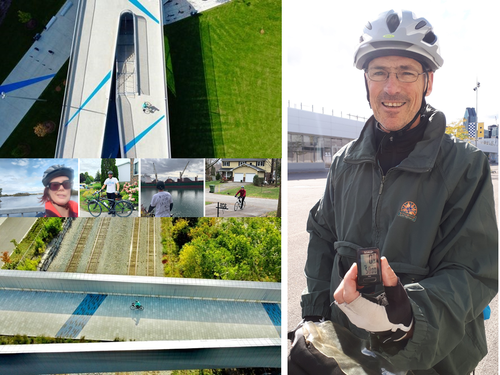 We look forward to seeing you at the 2021 Seaway Bike Tour!

All three distance groups (12, 25 and 50 KM) will be departing from the Grand Quai de Montréal (formerly called the Quai Alexandra) at staggered start times.

Ready to ride? Here we go!
Leaving the pier, look across the street at 201
The Ministry to Seafarers began operations more than 50 years ago and had a Seafarers' Centre at 201 Rue de la Commune ouest from the 1980s to 2001. 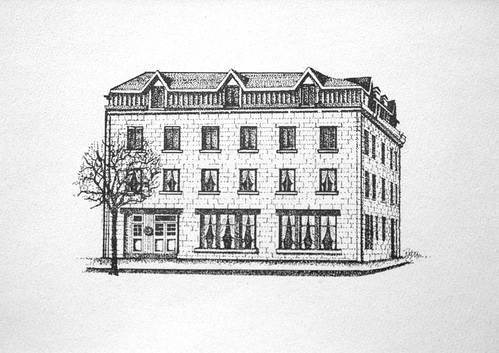 Rue de la Commune is at the heart of Old Montreal and where Montreal's port history all began. From the Bonsecours Market at the eastern end to the beginning of the Lachine Canal at the western tip, this street is dotted with historical buildings that still bear faded markings of a vibrant past. Today, the revitalized area now caters to tourists while major shipping operations have shifted east along the shore for 25 KM to Pointe-aux-Trembles.
Without the free transportation we offer, seafarers would face an expensive trip into town every time they have shore leave.

Turn left on Rue de la Commune ouest and head over the Peel basin at the Mill St. bridge
Mill Street bridge marks the entrance of the Lachine Canal. Inaugurated in 1825, it allowed ships to bypass the turbulent Lachine rapids in the St. Lawrence and continue upriver towards the Great Lakes. The opening of the St. Lawrence Seaway in 1959 made the old canal redundant. On the 25 KM and 50 KM rides, you will see the new shipping lanes that carry modern vessels safely past the rapids. 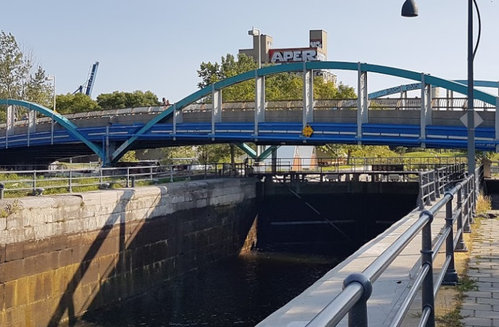 Follow the cycling path under the Bonaventure Expressway and turn left on Av Pierre-Dupuy.
On your left 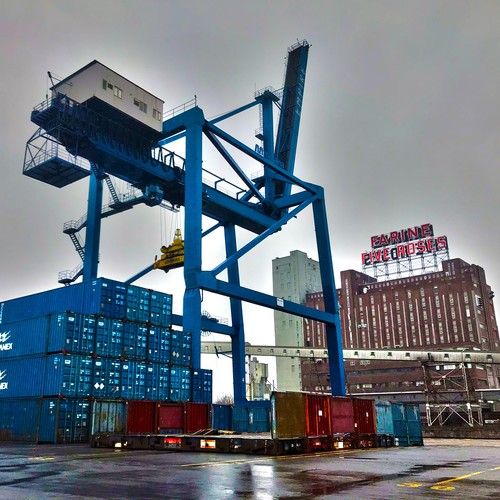 Bikerdike Terminal was built in 1896 and was the port's main facility until the 1970s. Today it serves as the provisioning port to Newfoundland and the Magdalen Islands. Cruise ships also dock here and occasionally, other ships. This is the closest terminal to the Seafarers' Centre.

The terminal is presently under construction to better handle close to 600,000 tons of cargo such as containers and vehicles.
On your right
HABITAT 67 is part of Montréal's Expo 67 heritage. It was built as a pavilion for the World Fair held from April to October of that year. It's considered an architectural landmark and one of the most recognizable buildings in our city. 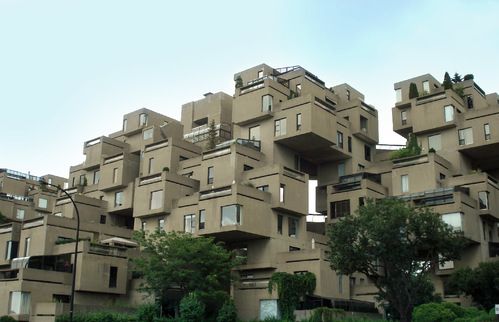 On your left across the water 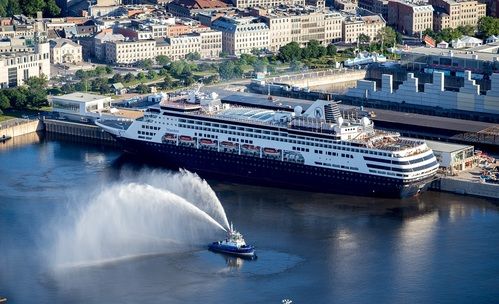 The Grand Quai de Montréal, formerly called the Alexandra Pier was built more than 100 years ago. At the start of the 20th century it was surrounded by grain terminals and Montreal boasted the largest grain port in the world.
Today, it's home to the Iberville Passenger Terminal as well as our Seafarers' Centre!

Did you know? The passenger terminal was inaugurated in 1967, just in time for Expo '67. Today, the Seafarers' Centre welcomes hundreds of cruise ship workers each year and offers them free Wi-Fi, snacks, souvenirs and chapel services.

As you cycle past, can you spot the observation tower that's being constructed right outside our main door? It's slated to open in 2021 and will boast unparalleled views of the seaway.
Take the Pont de la Concorde to Saint-Helen's Island.
SAINT HELEN'S ISLAND is the former site of Expo '67 and hosted events from the '76 summer Olympics as well. The island was enlarged and merged with several nearby islands, using earth excavated during the construction of the Montreal metro. The Le Moyne Channel separates it from the nearby man-made island of Notre Dame. Together, they form Parc Jean-Drapeau which includes the Circuit Gilles Villeneuve, a beach, the biosphere, an aquatic complex, the Steward Museum and the La Ronde amusement park. 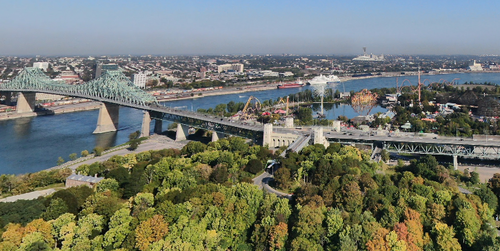 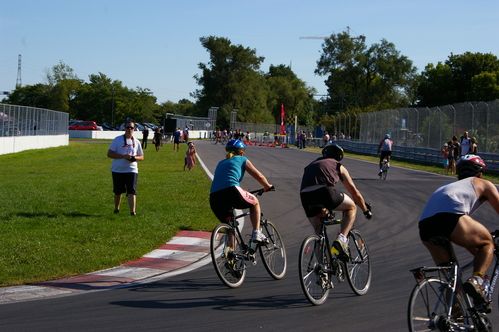 Today, NOTRE DAME ISLAND is best known for the Circuit Gilles Villeneuve where the Formula 1 Grand Prix du Canada event takes place annually. When it's not in use for an event, the track is open to cycling, para-cycling, inline skating and running enthusiasts.
Pit Stop: This is a good place for a water break or a trip to the loo.
If you're completing the 25 KM or 50 KM, you'll be taking a lap or two around the track before you move on. Cyclists completing the 12 KM will turn around and head back to the Seafarers' Centre the way they came.
Take La Route Verte 1 / La Petite Voie du Fleuve to the Estacade du Pont Champlain.
La Petite Voie du Fleuve: You are now travelling on a narrow stretch of land in the Saint-Lawrence River! On your left is the 33 KM-long shipping canal which allows ships to bypass the Lachine Rapids. You'll be passing by the Saint-Lambert Lock as well as under the Victoria and Samuel-de-Champlain bridges. Keep a close eye out for a ship which may be passing by. If you spot anyone, give them a hearty wave. These seafarers are the people who deliver to you 90% of all you use and own. 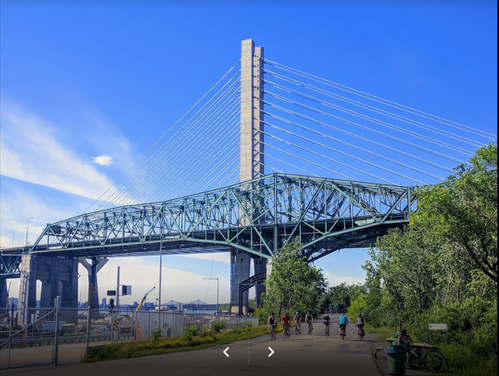 Cyclists completing the 25 KM will turn around at the turn-off for the Estacade and head back to the Seafarers' Centre the way they came.
Continue straight ahead to the Sainte-Catherine Lock. 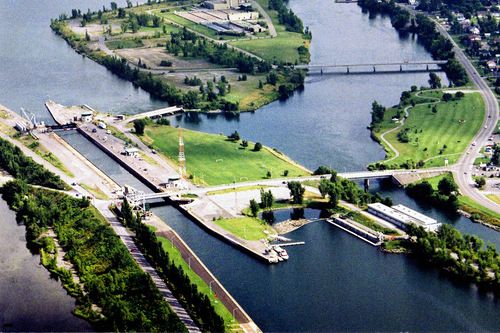 Congratulations, you've arrived!
Sainte-Catherine Lock: Together with the Saint-Lambert lock, it provides a total lift of 13.7 m to Lac Saint-Louis. Whatever floats your boat, right?
Did you know? The Saint-Lawrence Seaway has 15 locks (4 in Quebec). Together, they make up the world’s most spectacular lift system. Ships up to 225.5 metres in length (740 feet) are raised to more than 180 metres above sea level, about the height of a 60-story building. The ships carry cargoes the equivalent of 25,000 metric tonnes. More importantly, they carry seafarers too, the men and women who work tirelessly on the waterways so that the the global supply chain can move goods around the world.
Cyclists: It's time to turn around and head back to the Seafarers' Centre the way you came. May the wind always be at your back!